Pakistan has become inseparable from psychological terrorism. On most global news channels, we find out about minorities getting slaughtered because of radical assaults on churches, temples, or forced transformations of Hindus and Christians in the country. You may be wonderfully amazed to realize that there is a respectful small community in district Tharparkar. A region of the Sindh province where absolutely no part of this is experienced. The respectful small town named Mithi where the majority of Muslims don’t exist. Approximately 80% of the population who lived in Mithi are Hindu.

Mithi is one of just a modest bunch of remarkable towns in Pakistan where Muslims don’t approach the larger part. In this peaceful piece of a meandering aimlessly desert, There is a very strong bonding between the Hindus and Muslims they lived there like brothers since when the creation of Pakistan came into being. it’s the place where a Hindu fasts and a Muslim does not slaughter cows

Nobody believes that in this small town, the Hindus are fasting during the Ramzan with the Muslim brothers. They respect each other religion so much that Hindus never arrange any marriage ceremony in the month of Moharram and keep in mind Hindus, Muslims don’t slaughter cows.

During the adoration of Hindus, no loudspeakers are used for azan, and similarly, when Muslims adorate namaz no bells are rung in the temple. There are a lot more Hindus in this town who cheerfully enjoy giving drinks and food to the Muslim brothers during Ramzan. Both Hindu and Muslim barter desert on Diwali and Eid. This between the Hindus and Muslims is endearment and fraternity which leads to the illustration of pluralism over the receptive Sufi culture of Sindh. 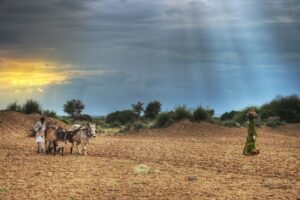 Talking with the local people of Mithi found out that Hindu speakers are figuring out majlis in Moharram. Moreover, Hindus also take part in many festivals of Muslims rather it is 12 rabi-Ul-Awal or Eid. the Hindus share their record of Moharram where they drove Ashura strolls.

Some peoples out of the region think that any movement happening to forcefully convert Hindus or force Muslims to be a part of Hindus. But nothing like that happens in this small region they live their life peacefully. There has not been a single day that we have seen a severe conflict. The people of Mithi have been educated from their childhood that you have to give rights to every person no matter what if their religion is different. They believe in their fraternity.

The people of Mithi are well educated and they are focusing to educate more people in their region. They allow them to get a job in this small town no doubt they have fewer job opportunities. They’re the people of Mithi who migrate to other cities but at least they are trying to develop their small town.

They live, eat, and take an interest, considering the way that as exhibited by them, it is in their way of life. If we take a look all religions go against one another but the behavior of their followers to build their settlements on the base alone is not the right behavior to do. People can live together and do work together Just the sectarian can’t and they can be found in every supreme party We shouldn’t allow them to assume control of the perfect associations of Pakistan.

With the respect to others faith is the course of action of a lot of Pakistan’s current state of affairs Religions contrast, people don’t. Assuming that you think Pakistan is all about radical’s assaults on churches, and temples butchering strict minorities. And forced transformations of Hindus and Christians in the country. I would demand you to visit Mithi something like once in your life.

The Story Behind Karachi, Pakistan

Why Sindh High Court had been so popular ?